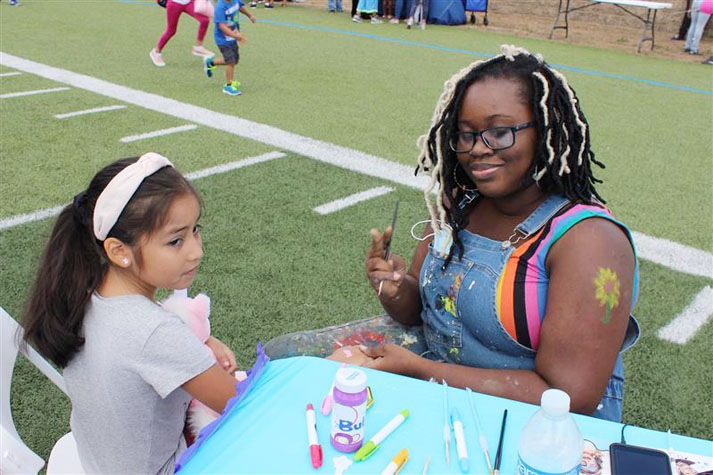 POUGHKEEPSIE – Children played games, got temporary tattoos and jumped in bouncy houses while parents learned about the programs, services and resources available to them at the second annual Bridge 2 Poughkeepsie event on Saturday.

Designed to introduce families new to Poughkeepsie or just the District to all that is offered directly by the District or through its many community partners, the event featured two bouncing houses, a DJ, a tattoo artist, a table to bubbles and tables from 28 community organizations. and many from the neighborhood. There was also food, popcorn and refreshments.

Each child in attendance also received a backpack full of school supplies and books, courtesy of the Marist Liberty Partnership and Staples.

Event coordinator Julie Maserjian, who works in the community schools department, said it took about four months to organize the event.

“Everything is free for families,” she said.

According to Natasha Cherry, executive director of community schools, about 450 new families enrolled children in school this year. About 350 people attended the event.

“It’s like a new family orientation where we talk about the district and let them know about all the programs, services and resources they can take advantage of,” Cherry said, adding that the Early Learning Center had the highest concentration of new families, probably due to the expanded full-day pre-kindergarten program.

Luis Maces graduated from Poughkeepsie High School in 2016 and attended the event with his nephew, Dylan Alonzo, and Alonzo’s grandmother, Irene Garcia.

“They just launched a new bilingual program and that’s something I didn’t have. It’s a pretty good program for him because he’s bilingual, so he has a better learning experience,” Maces said.

Alonzo enjoyed playing a game of ring toss at the Bilingual Program’s booth, but was more enthusiastic about going to the bounce house across the field.

Sabrina Brown spent some time coloring a butterfly on one of the booths. She said her favorite colors were blue, pink and purple. She even brandished a necklace with a sand-filled charm in those colors.

“My dad helped me do it,” she said, pointing to Everton Brown who was standing behind her.

“Mack is very ready to learn,” said Melodie Minus, adding, “I’m very excited to see what projects they get into and how Mack learns.”