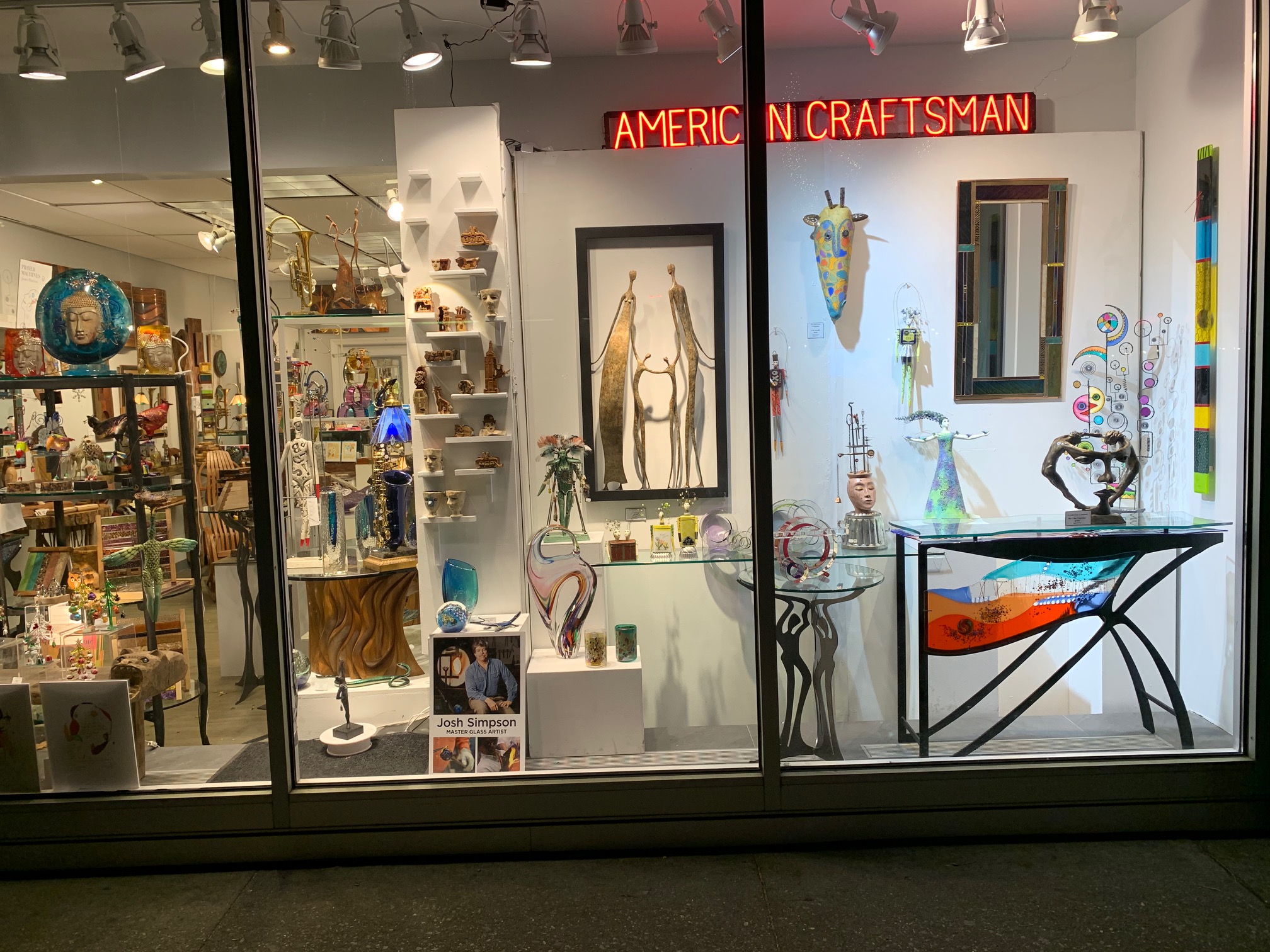 Anyone who appreciates fine craftsmanship already knows how to make an annual pilgrimage to the Berkshire Arts Festival held at Ski Butternut every 4th of July.and weekend since 1981 (this year’s dates are July 1, 2 and 3) where the work of some 150 hand-picked exhibitors – jewelers, fashion designers, ceramists, art glassmakers, artists, sculptors, fabricators furniture, etc. – can be found.

But not everyone knows Richard and Joanna Rothbard from American art marketing, the couple who created this show and have been running it for 22 years now. Impresarios of highly successful craft shows across the country, the Rothbards have a special connection to the Berkshires. They own An American Craftsman, which has had an outlet in the Berkshires since 1981. Their Stockbridge store operated from 1981 to 2020; the Lenox store opened in 2017, and they briefly ran a third location on Stockbridge Road in Great Barrington. And now they’re adding three new Berkshire shows to their summer schedule, all at City Park in downtown Lee, Mass. These shows in Lee will be on Memorial Day weekend, the last weekend in August, and Labor Day weekend. Each of these shows at Lee will feature a rotating line-up of 25-35 craft artists. And another show is scheduled for October 1st and 2n/a on the grounds of Shakespeare & Co. in Lenox.

Richard Rothbard is the couple’s most public face, although Joanna has been their partner and support since 1976 when she applied for a job at her first gallery on the 29thand Street and 3rd Avenue in Manhattan, and they married in 1977. And she seems to have enjoyed riding the roller coaster of Richard’s entrepreneurial adventures while maintaining a remarkable serenity.

Richard grew up in Lawrence, Long Island, where, he says, competition was fierce and results were about all that mattered. So how did a kid from Long Island, who caught the theater bug while earning a degree in finance at Hofstra University and spent many years as an actor (most notably playing Boy in The Fantastic off-Broadway) end up producing arts and crafts exhibits in the Berkshires? As you can imagine, it wasn’t a straight line, but the trip makes for a good story. And it also shows the kind of risks and rewards that come with a career as an entrepreneur in the highly competitive world of art marketing.

As Richard tells it, he left the theater because he fell in love with a dining table. “It was the one my aunt got from George Nakashima. Nakashima worked wonders with wood, and at 27 I became a carpenter. From the 1960s he was making furniture. In 1967 he had the first of several stores in Manhattan where he and other artisans sold their work. Richard is now known for the intricate puzzle boxes he makes himself under “Boxology”. And how he started making the boxes , it’s also a story. He had moved his carpentry equipment to the basement of the store at 29and and 3rd (where he also met Joanna). One day a man from California came with some cedar logs. He had heard that Richard had a bandsaw. Could he use it to make boxes? Richard watched, then studied and learned, and within a few years was making highly polished wooden boxes and earning a reputation as the premier bandsaw box artist.

He began selling his work at shows around the country and in 1979 he was accepted as an exhibitor at the country’s first show, hosted by the American Craft Council (ACC) at the Dutchess County Fairgrounds in Rhinebeck, NY. acceptance, he knew many talented artists who had been rejected by the ACC, and he heard their grumblings.

So the next year, 1980, he rented the parking lot across from the fairgrounds and put on a show he called “Rejects.” “The show was a huge hit,” Rothbard says, “and it launched my career.” He had 50 exhibitors who weren’t afraid to break away from the ACC. Some 1,000 shoppers crossed the street to get to his show. The following year, “Rejects” had 150 performers, and by 1982 there were 300. In 1984, the ACC moved its show to the Big E in West Springfield, and Richard moved in next door with about 80 exhibitors under tents. Three years later, its tents housed 300 exhibitors. A few years later, the ACC moved their show to Columbus, Ohio and Richard stopped following them.

By then the Rothbards were already in the Berkshires. The connection with the Berkshires began in Richard’s childhood; he went to summer camp here and always wanted to come back. They also felt there was a market for fine craftsmanship in the Berkshires. Thus, the success of the first show “Rejects” in 1980 encouraged them to expand to Ski Butternut in 1981. They also opened a store in Stockbridge at the same time. Luckily, while on their way to Stockbridge to do pre-show work, an antique dealer was leaving a shop. The Rothbards were intrigued. The owner happened to be there, and they rented it on the spot. And they occupied that store until early 2020. In 2017, they purchased a building in Lenox where they were able to establish a much larger store and expand the variety of their merchandise.

Over the years, the Rothbards have seen great changes in the arts and crafts market. In 1980, some 25,000 people came to the ACC show in Rhinebeck with money, and performers could make a very good living doing shows. At the same time, there were other prestigious places. The Philadelphia Museum and the Smithsonian have held annual craft shows. The American Craft Museum occupied a major building on the same block as the Museum of Modern Art. These shows no longer exist. People have dropped the word “craft”. For example, when the museum moved to the former Huntington Hartford Museum at Columbus Circle, it renamed itself the Museum of Art and Design.

There are still many well-established salons, but other factors have contributed to making the business more difficult. The universe of artists who will perform is shrinking. “Before, you could organize shows with some predictability. Artists who would normally get in their vans and drive six hours or even a day or two to see a show are now hesitating. The price of gasoline discourages them. And many artists don’t want to take the risk of renting a stand. For example, the Rothbards observe, many artists in the Berkshires won’t do shows because they fear spending that upfront investment.

“The challenge of doing a show,” says Rothbard, “is that it has to be an instant hit. It’s like opening a new business in a minute. It’s a popup. People either come or they don’t, and you have no chance of developing it over weeks or months. The success of a show depends on preparation. You have to get the right mix of artists and you have to drive traffic with the right mix of promotion and advertising. “As far as I know,” continues Rothbard, “we’re one of the few promoters launching new shows.”

The Rothbards have built a solid reputation for taking care of their exhibitors and bringing in buyers. “Our model is unique as we have an ongoing organization with trade shows and outlets and now a growing online business. We even plan to open a new store in Manhattan on Lexington Avenue at 63rd Street. We have also taken care to keep our costs for artists reasonable and affordable. We are an organization that a good artist can turn to for opportunities, where they can really participate. And we work hard to attract crowds. When we arrived in Butternut, we networked like crazy among other businesses and also among hotels and hostels. The first day we had 2000 people. It was a great success, and we have done well every year since.

They enjoyed operating in the Berkshires. The business community here has been collegial and supportive. And there is a lot of interest in art among residents and visitors. “But,” concludes Rothbard, “it continues to be a challenge. For a show to be a success, people have to come and the artists have to sell. Artists come when they trust the people promoting the show, but even then no one will come if it’s too far or too expensive.

12 Westchester/Hudson Valley issues and links for May 2022