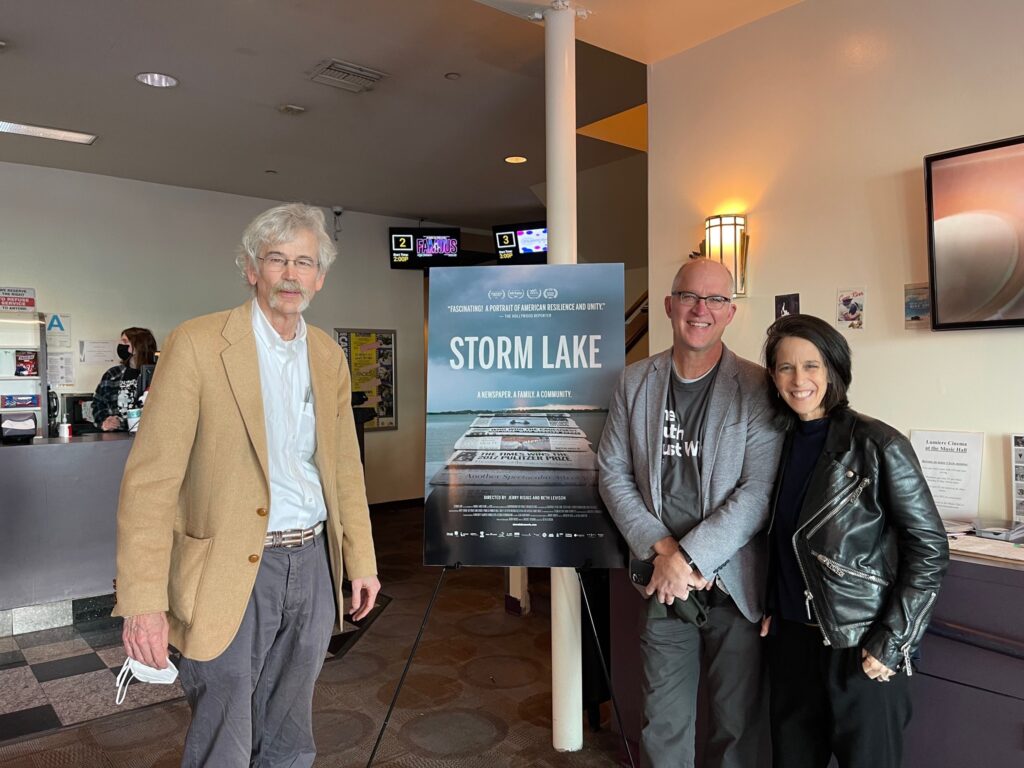 “Storm Lake” has an impact on democracy in the United States

The sun rose through a hint of fog on Monday due to the constant dissipation of last Friday’s snow dump. Sorry I missed it. I was just in San Francisco from New York to Beverly Hills – whoo-wee, Jethro! – for screenings of the Oscar-winning documentary “Storm Lake”. Seriously. And to draw attention to the link between community journalism and democracy.

This coast-to-coast tour with co-directors Beth Levison and Jerry Risius culminated with an impact campaign that dates back to last summer with the film’s big screen debut at the Middlebury Film Festival in Vermont. .

We toured the movie all over Iowa, starting with the Iowa PBS red carpet at the Vista Theater in Storm Lake (where John and I got our first jobs). We sold two auditoriums in Algona, illuminated Des Moines with an outdoor screening near the Varsity Theater and Drake University, and spawned a community conversation in Greenfield with economist Dave Swenson on how to firm up rural America. . Peach the Newshound was able to attend the Iowa City screening at Film Scene – anything goes in Johnson County.

We hit Detroit, Chicago, the Twin Cities, Denver, Milwaukee and Columbia, Mo. Stalwart, Tom’s son, replaced me when I burned down. We partnered with local media at each stop to promote civic engagement.

We’ve also participated in countless Zoom Democracy Forums ahead of the film’s nationwide release on November 15 on the PBS Independent Lens series.

Everywhere we went we spoke of an informed electorate being the foundation of a functioning democracy, Civic 101 to crowds eager for the message. We shared the scene with immigrant editors from the Bronx, women who run nonprofit news in Denver, and a Latina who reports the news in text messages to immigrants in the Bay Area. It was invigorating and exciting to watch journalism reinvent itself in so many ways. New entrepreneurs rally around the film as a focal point. We were touched and encouraged to hear New Yorkers’ honest affection for our family and community.

Imagine what I must have felt when I arrived in my hotel room in Detroit at midnight and found an email from a billionaire in Long Beach (Iowa by the Sea) that said he wanted to give us money. He wanted to make sure that we provided our employees with health insurance. He wants to know the pandemic won’t kill us. He is an immigrant from China. He came to the United States via Germany (where he learned English), graduated in electrical engineering, started a business, went bankrupt in the 1980s, started another business in his garage and made a fortune. He wants to give back. He gives back because he knows tyranny and democracy. He came to the show in Los Angeles and loved the movie. He said he wanted to do more to help rural Iowa through the nonprofit Western Iowa Journalism Foundation. The guy has wings. He has never been here but believes in the place. There is a God, and the American spirit is alive and well.

The truth will prevail. Democracy will survive thanks to immigrants like our Californian benefactor who are enrolling in Storm Lake schools right now.

What a pleasure to meet Iowans along the way. The New York director whose father is from Lake City. The woman at a screening in Rhinebeck, NY, who is from Keokuk and collects geodes. And how about those Iowans who came out in LA for the movie – there were 70 of them, including Storm Lakers Rob Elk, Nate Fulcher, Nick Kurtz, and Chuck Rowley. The state film bureau, Produce Iowa, hosted the largest Beverly Hills rooftop reception in Iowa history. Elk and Kurtz got a couple of the main cast for the event. So we did our job. Liz Gilman, who runs Produce Iowa, is a babysitter. It restores Iowa’s reputation as a place to make movies.

In San Francisco, a bunch of Wall Street Journal and New York Times newspaper rats whose offices had a joint holiday party smelled like food at our reception. They came and ate all of our sliders while I regaled them with stories of Storm Lake and pigs. Of course, one of them, Shara Tibken, is originally from Atlantic and frequented Iowa State. Technical editor for the Wall Street Journal. She uses the real Iowa Nice schtick to her advantage.

Air travel is degrading and demeaning. Joe Biden should do something. David Byrne torched the St. James Theater home on Broadway from our perch of large seats. Homeless people left Washington Square Park and begged for milk at Starbucks in Beverly Hills. If I were rich, I would have an apartment in San Francisco. Denver is not viable. There is no place like Chicago, a sort of suburb of Iowa. What’s not to love about St. Anthony Falls in Minneapolis on a beautiful September evening for a busy screening with all your old Storm Lake friends – Marty Case, Carolyn Veehoff Wolski and her brother Mike, the whole Murray clan – and my buddy from Storm Lake. Tom Lentz University who spent a year in a Puff Night.

What a great race. Thanks to Beth and Jerry for the movie. It is making a difference all over America.

Art Cullen is the publisher and editor of the Storm Lake Times. He won the Pulitzer Prize for Editorial Writing in 2017 and is the author of the book “Storm Lake: Chronicle of Change, Resilience and Hope from a Heartland Journal. “Cullen can be reached at [email protected].

Here’s where to celebrate New Years in the Hudson Valley